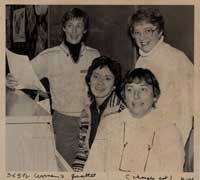 We take an historical view of the Northern Michigan Chorale as they look back to their beginning in fall of 1982. The idea of a choral group for Northern Michigan began in a discussion with Audrey Collins, Ann Irish, Meredith Richter, Tom Rowe, Gig Stewart and Connie Tanner. Don Large as a “possible director,” was asked to join in the discussion to explore such a venture.

Don had recently retired to Alanson, from Detroit, where he was best known for his choral groups at radio station WJR and the University of Detroit. He agreed to help us out and types of choral music were discussed. Bay View Conservatory had several of Don’s published pieces that we could borrow as a start, and a time, date and place was set. A name for this group was suggested by Don as the Northern Michigan Chorale and the meeting was adjourned.

A brief news item in the Petoskey News-Review, stating that persons interested in singing “music on the lighter side”, should meet at the McCune Arts Center – on the first Monday after Labor Day. With thirty borrowed copies of “I’ve Been Working On The Railroad” and “When the Saints Go Marching In”, the first rehearsal began with sixty-two people showing up. With ninety total people joining the following week and some copied music from Don’s files, the Chorale began rehearsals in earnest.

The first concert was given on the Sunday and Monday after Thanksgiving. The concert was theme-centered, with a mix of show- tune arrangements by Don Large, variety songs and holiday music that caught the audience’s attention and gave encouragement to the Chorale to start rehearsals for a spring concert. This combination of music, created great listening and soon, sold out concerts were usual, while performing at the Petoskey High School in the Team Teaching Room/Auditorium. The Petoskey Middle School auditorium was the performance space for several concerts, but then, upon moving the performances to the Ross Stoakes Theatre in the Crooked Tree Arts Center, a closer connection with the audience was experienced. Concerts expanded to three and then four performances both fall and spring. The Chorale appeared in concerts at Bay View in the John M. Hall Auditorium.

Averaging sixty to one hundred performers each concert, depending on the season, the Northern Michigan Chorale is a mix of persons from northern Michigan, doing what they do best – whether singing solos, or in small groups or strictly ensemble. When Don asked you to sing something, who could say, “No”?

Membership dues and concert receipts were used to purchase music and cover production costs. A goal to purchase a sound system created an opportunity for ensembles from the Chorale to perform for conventions and groups at Bay View, two times at the Grand Hotel on Mackinac Island, and both Boyne Mountain and The Highlands. Performances also included appearing at the Cheboygan Opera House, in Charlevoix during festivals and also at events in Petoskey. The Chorale continues to have both fall and spring concerts. For a number of years the Chorale also gave a short program at the commencement for North Central Michigan College, as well as Petoskey Concert-In-The Park.

Prior to his death, due to cancer in August, 1988, Don Large gave his music library to the Northern Michigan Chorale. He also recommended that his substitute director, Connie Tanner, continue as his replacement. Other directors following Connie include: Will Moyer, Jerry Westerman, Gig Stewart, Julie Pierpont, Peter D Sims and Brad Moffatt. Accompanists of longest standing were: Bea Thomas, Kris Anderson, Sally Page and Howard Richards. Currently, Julie Pierpont, as Music Director and Cynda Coleman as accompanist serve the Chorale.

The Chorale continues to award Vocal Music Scholarships to young singers each year. People of varying ages, from every walk and interest in life in northern Michigan, have created the membership of Northern Michigan Chorale. Charter members, Charlene Brown, Meredith Richter and Sarah Sevener continue to sing with the Chorale.

North Central Michigan College awards credit for students who enroll in the Northern Michigan Chorale. Continuing, as in the beginning, with a no audition base of volunteers, singers join from the following communities; Petoskey, Alanson, Charlevoix, Levering, Harbor Springs, Mackinaw City, Boyne Falls, Wolverine, Cheboygan, Indian River, Carp Lake, Gaylord, Boyne City, Pellston, East Jordan, and Walloon Lake. The interest and appreciation for the Don Large “musical sound” continues through the inclusion of his arrangements in most of the concerts.

The Northern Michigan Chorale received the 2007 eddi Award for Arts and Cultural Organization from the Crooked Tree Arts Center.

The talent of former and current members has been welcomed over these years and their willingness to work, as they volunteer, is very much appreciated. In looking back, we have a chance to look forward and in so doing, the Northern Michigan Chorale truly knows the meaning of the song … “We’ve Only Just Begun”.

If you love to sing, we invite you to join us when rehearsals resume. Information can be found on our web site; nmchorale.org.